WELLBORN ARE MY CHILDREN – identical epitaphs on identical tombstones a thousand miles apart – leads photographer Sam Dawson to discover a crime, perhaps the most heinous in U.S. history. More than three-quarters of a century have passed since the undetected mass murders of young women occurred. But the tragedy lives on in this fast-paced journey of discovery.

Eugene Eris, the name inscribed on the two tombstones, haunts Sam at every turn. The beautiful geneticist Blair Tennyson helps Sam understand the how and why of genetic manipulation and the dark history of America’s attempt to genetically improve the human species. Sam trusts no one except small-town waitress Annie George. But, like Sam, Annie is linked to Eris. Together they race to unearth the graves of a lost cemetery and to expose the mass murders of people who were involved in an experiment much larger and more sinister than Sam envisioned.
Steven W. Horn’s techno-thriller The Pumpkin Eater weaves a story of dark secrets while challenging readers to consider politically charged social issues as the novel races toward an unthinkable ending.

The Pumpkin Eater, the nightmarish evildoer of the past, haunts the present and lingers just below the surface of the future. Who is he? What has he done? Who are his protectors? The tension mounts as Sam navigates toward the shocking conclusion. 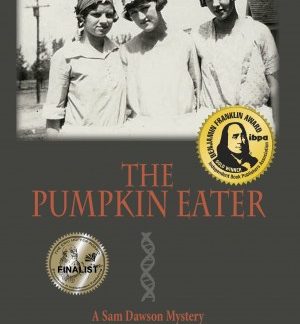