A History Lover’s Guide to Cheyenne

Celebrating at their encampment near Crow Creek on July 4, 1867, railroad surveyors named the settlement after the local Cheyenne tribe. By the time the Union Pacific Railroad arrived in November, the town had grown from a tent city to a “Hell on Wheels” town of ten thousand souls. Cattle barons brought herds to graze the open range, while they reposed in mansions on Millionaires Row. By 1890, the gleaming dome of the new capitol building was visible all the way down Capitol Avenue to the majestic Union Pacific Railroad Depot. Authors Starley Talbott and Michael Kassel explore a rich past, including the origins of the F.E. Warren Air Force Base, the foundation of the world’s largest outdoor rodeo and the unheralded history of early aviation that eclipsed Denver. 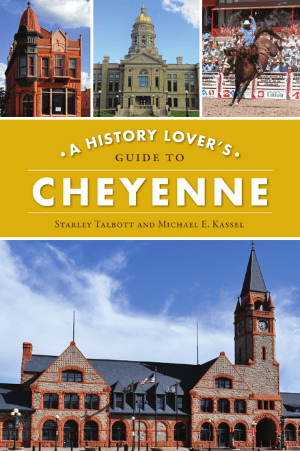 You're viewing: A History Lover’s Guide to Cheyenne $21.99
Add to cart